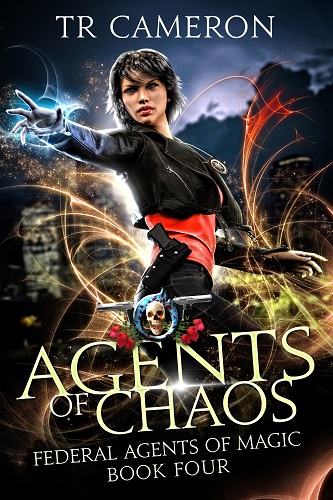 …by magical villains determined to bring her and her agency down.

The bad guys have something big planned, and like a storm over the horizon, she can feel it coming but doesn’t know how bad it will turn out to be.

The answer? Really, really bad. Diana and her team will need to be at the top of their game to survive.

The troll that’s adopted her patrols in the night, searching for the cosplaying criminal who has evaded them.

The team’s undercover agent gets in deeper with their opposition. Inevitably, he faces a moment of truth where he faces off against the good guys.

Oh, and Kayleigh wants to mount an AI-controlled rocket launcher on the roof of the house she shares with Diana and Rath, which Diana thinks is the mother of all bad ideas.

The heat is rising, but Diana won’t abandon her responsibilities. No way, no how. Which means there’s no way out but through.

For a thrilling action-adventure with spells, guns, hand-to-hand combat, and just the right amount of snark, join the team today!