Friend or foe? Can Ruby figure out who’s who?

A box set and a new release! It’s a great start to the week!

Did you have a good weekend? The weather sure has been crazy, and I hear the forecasters are talking about a very cold change coming this week. This old ship isn’t working like it used to, but this old gnome is doing the best he can to right things. It just might take a little bit of time to get things back in motion in the opposite direction.

A Magical Alliance released yesterday! Ruby’s got her hands full and needs to figure out if her new allies are really allies or not. There’s also that pesky destiny thing she needs to learn about. Will she be able to unlock an oracle’s mystery and save her hometown? Continue the adventures in this Oriceran series today!

Remember that boxed set I was telling you about that you would enjoy? Be sure to pick up The Adventures of Finnegan Dragonbender and The Lone Valkyrie 7 Book Boxed Set! You get all the books in the two series at one VERY low price! If you don’t have them already, it’s a great time to pick them up! If you’re new to the Terranavis Universe, this series is a fun ride!

Don’t forget What The Dwarf. releases Sunday. If you haven’t preordered it yet, you have less than a week to do so.

And there’s Pizza Lunch on Friday! Details are below!

To be eligible, sign up at this form: https://forms.gle/JUrfNRvfMr1p3icu8 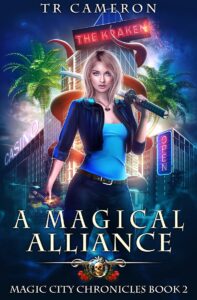 Magic City is full of hustlers, con men and magicals just out for a good time. The perfect mix of glamour and gangsters.

But underneath it all, a con man is scheming to pull it all apart.

Can Ruby and her weretiger, Idryll find a way to save her hometown before time runs out?

Or will her quest lead her to her own unforeseen destiny? A lost heritage that can unlock an oracle’s mystery.

A Drow trader with an eclectic set of resources offers to help. A favor to be returned later.

A purple-haired troll who offers to teach her to fly or the hooded archer whose help Ruby can’t decline. Are they really friends or foes? 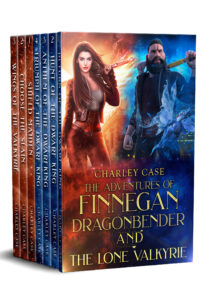 A broken ship. A missing friend. A whole new world of magical artifacts for the taking. A cosmic vacation for our intrepid treasure hunter Finnegan Dragonbender and his Faerie Dragon Penny. They team up with Mila Winters and meld as a team to save Earth.

This GIANT boxed set contains the first four books of The Adventures of Finnegan Dragonbender and then continues the story with the complete 3 book Lone Valkyrie Series.

The Adventures of Finnegan Dragonbender

After years of searching Finn has finally found the motherload. Unfortunately, there’s no way to get it home. And he’s got to meet John Wayne.

Stranded and alone in Denver, Colorado, Finn and his partner Penny (a foot and a half long Faerie Dragon) search for friends and allies in this strange new land.

But something about this place isn’t right. Magic has gone underground, and has anyone seen John Wayne?

Lucky for Finn he’s a Dwarf, and underground is where he does his best work.

Join Finn, Penny and their new friends on an adventure that spans the globe and holds the fate of an entire planet in its twists and turns.

And just maybe a tall Dwarf and a small dragon can find their place in the universe.

Every time a shot rings out a Valkyrie earns her wings. Mila is earning hers the hard way hunting down the monsters that have taken her sister.

It was supposed to be a simple scouting mission.

But the trail is leading her to an unexpected discovery. What if the things that go bump in the night start to slither out into the light?

An ancient horror, full of malice and nightmares, is coming to the Idaho Wilderness.​

She should probably run, but Valkyries don’t back down from a fight, no matter the risk.

Besides, there are lives at stake, and it’s a Valkyries job to choose the dead. The Dwarf King would be proud. 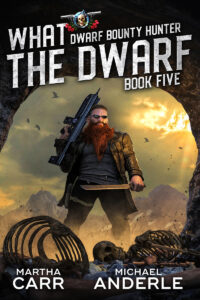