If you like audiobooks, this will be a great week for you.

A lot of you have been asking when the Dwarf Bounty Hunter novels would come to audiobooks. Good news! They are actively in production and the first two books are available now! Pick up Go Dwarf Yourself and Don’t Give A Dwarf to listen as you drive, work out, whatever! The narrator has commented he really enjoys the series and looks forward to continuing.

The next Lunch Together While Apart will take place Aug. 6. Check out the link below to register to win a pizza!

Preorders are coming for the next books in all the series soon! Keep an eye out in the groups for them.

We will be doing another pizza lunch at 1 p.m. Central Daylight Time on Friday, August 6, and everyone is invited to attend.

To be eligible, sign up at this form: https://forms.gle/48iFvg1BWbyqKomLA

Note: The chance to win a pizza offer is for those in the United States only, but everyone can join us on Zoom.IMPORTANT REMINDER: Make sure your pizza place delivers for lunch. Or note if you’re picking it up. 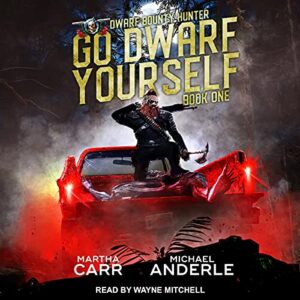 “One of the best damn bounty hunters. Period.” (James Brownstone)
Johnny Walker was a good bounty hunter in his day. James Brownstone good.
But everybody has a line. Johnny found his when his teenage daughter was murdered. Who was the killer? Even Johnny couldn’t figure it out. Everybody’s favorite dwarf retreated to his cabin in the swamp with his two hound dogs by his side and retired with his guns, his whiskey, and his memories.
Except magical monsters weren’t done with him…yet.
A young female shifter has gone missing, and her parents are dead. The Feds know that Johnny is her only hope, and the clock is ticking.
Johnny can’t say no this time. He’s off to New York City with Light Elf Fed Lisa Breyer to get her back.
Dwarf the Bounty Hunter is back to kick ass and take names. Or maybe just kick ass. What will he do when the clues connect to the 15-year-old cold case of his daughter’s murder?
AVAILABLE ON AMAZON 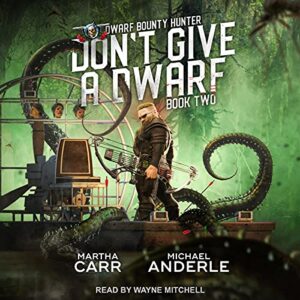 Johnny Walker, dwarf bounty hunter, is back on the hunt.
Wanted: dead or alive. Logree Creature. Origin is Oriceran. Intelligent, flammable, displaying purple goo and tentacles. Do not approach. Leave to the professionals…like Johnny Walker.

Just what the Everglades needed.

But who’s going to watch the teenage shifter staying in his cabin? Turn your back and she’s wrestling an old gator from the swamp.

Johnny knows what to do. A little magi-tech and a few favors can get the answers he needs.

Will it be enough to capture the monster? How will he raise a magical in the Glades? 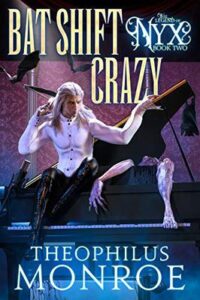 I told myself I’d never go back.

Not to get treated… but perhaps Doctor Cain can help.

The world’s original werewolf… and its first murderer.

If anyone can help me get a handle on an undesirable shape-shifting situation… it’s him.

But there is a coven of bat-shifting vampires with other plans.

Surely their appearance and my… acquisition of this ability… isn’t a coincidence.

If I’ve learned anything hunting vampires, it’s that I can guarantee that they’re up to no good.

And I can’t help but wonder… am I the one hunting them?

Or have the tables turned?

Go up and click ‘Read for Free’ or ‘Buy Now’ and find out how Nyx, or “Nicky,” goes Bat Shift Crazy!

Bat Shift Crazy is the second book in the Legend of Nyx series. If you enjoy shifter urban fantasy, vampire urban fantasy, with snarky and unlikely heroes, then you’ll enjoy this vampire hunter series. Fans of Michael Anderle, Shayne Silvers, or Linsey Hall will love Theophilus Monroe’s Legend of Nyx series. Bat Shift Crazy is a one-of-a-kind shape shifting LGBT adventure where a trans heroine must confront her inner demons if she hopes to vanquish the latest vampire threat.