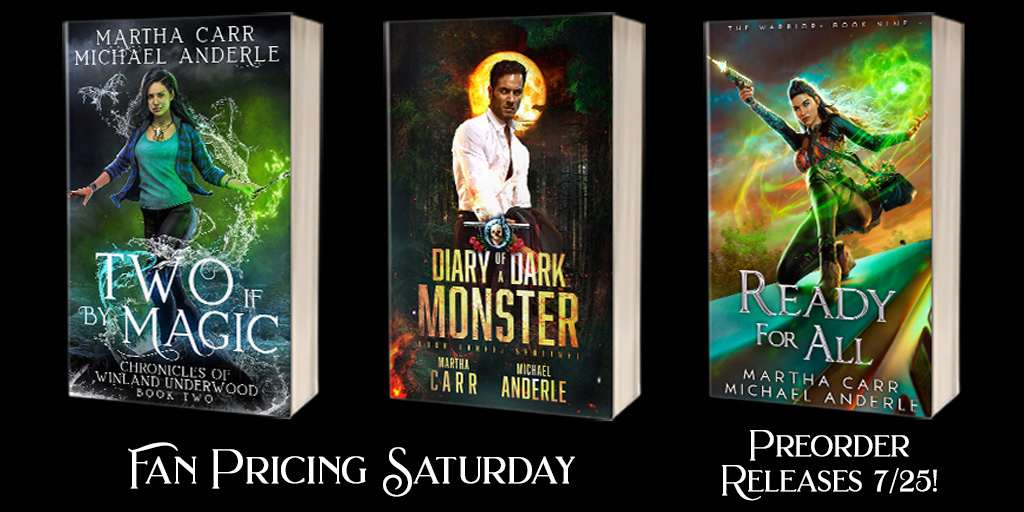 It’s hard to plan a wedding when the bad guys just won’t take a hint. Invite only… Brownstone Security is hired for what should be a relatively simple job. Protect a courier transporting a valuable painting. Nothing about the job is as it seems and Alison ends up working with the FBI’s first witch on […]

What could be harder for Alison than hunting magical beasties? Meeting Mason’s parents. Now she knows what Mason felt like meeting her father. Well, that was James Brownstone, so… maybe not. No time to ponder impressing the parents anyway – she has other issues to deal with. Sonya’s father has reappeared, seeking their help. But […]

The Seventh Order has been taken out… Things seem calm. But Alison and her team know better. Trouble’s always coming for a Brownstone. Good thing she has an answer for them. Brownstone Security’s reputation is spreading, which means more jobs for the growing team. But more money means more mayhem looking for them. Can the […]

No more delays. No more nice Drow Princess. Alison and her team are ready to open a can of whoop-ass on the Seventh Order and put an end to them – for good.  If they can track them down. With Brownstone Security’s best on the job, it doesn’t take them long to find out when […]

Alison Brownstone has the leader’s name and is ready to kick ass. Time to take the fight to the Seventh Order dark wizards. Tracking dark wizards is hard but no one is good enough to evade the bounty hunter for long. Unless a friend goes missing first. Shay asks Brownstone Security for help finding Lily […]

When a Power Broker is threatened, she knows who to call… a Brownstone. Alison and her team have to travel across the world to protect Abigail Wilson, CEO of Aeternum, as she negotiates for mining rights of a mysterious crystal. Drysi Jones comes along for the ride. The simple escort mission turns deadly. They aren’t […]

The Bitch is Back. Alison’s powers are restored, and her magic is sizzling. Dark Wizards gather in Seattle for a meeting. Alison isn’t about to let them set up business in her town. Her friends have her back, even if one of them may be a traitor. A dark wizard escapes the raid. Doesn’t he […]