Do you like boxed sets? Check out the first boxed sale of several coming up!

We’re kicking off this week with the first of three boxed set sales in the coming month.

And if you like trolls, Diana has one of her own name Rath. Be sure to check it out!

Next week there will be a sale on the Scions of Magic Complete series boxed set. If you can’t wait to get it, it’s out now. And next month there will be another new box set on sale.

And if you like audiobooks, we’ll tell you all about the most recent releases later this week!

Now, I need to get back to adjusting things. Apparently, snow is “uncommon and unusual in Texas” and is making the natives restless. Guess I need to work on fixing this old ship some more. 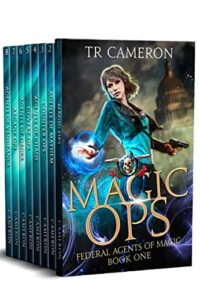 Get your copy of the ENTIRE Federal Agents of Magic series for one low price all in one GIANT boxed set!

Discover why reviewers say they LOVED this series and were all anxious for the next book to come out!

FBI Agent Diana Sheen is an agent with a secret…

…she carries a badge and a troll, along with a little magic.

But her Most Wanted List is going to take a little extra effort.

She’ll have to embrace her powers and up her game to take down new threats,

Not to mention deal with the troll that’s adopted her.

All signs point to a serious threat lurking just beyond sight, pulling the strings to put the forces of good in harm’s way.

Magic or mundane, you break the law, and Diana’s gonna find you, tag you and bring you in. Watch out magical baddies, this agent can level the playing field.

It’s all in a day’s work for the newest Federal Agent of Magic.